A “right-wing extremist” armed with semi-automatic weapons rampaged through two mosques in the quiet New Zealand city of Christchurch during afternoon prayers on Friday, killing 49 worshippers and wounding dozens more.

The attack, thought to be the deadliest against Muslims in the West in modern times, was immediately dubbed terrorism by Prime Minister Jacinda Ardern, as she guided a shocked nation on one of its “darkest days”.

The Foreign Office in Islamabad said four Pakistanis were injured in the attack, and another five Pakistanis are “missing”.

The attacker live-streamed footage of him going room-to-room, victim to victim, shooting the wounded from close range as they struggled to crawl away. He allegedly published a racist “manifesto” on social media before the attack, featuring conspiracy theories about Europeans being displaced, and details of two years of preparation and radicalisation leading up to the shootings.

A 28-year-old Australian-born man has been arrested and charged with murder. He is set to appear at the Christchurch District Court early Saturday. Two other men remain in custody, although their link to the attack is unknown.

Pakistan’s deputy high commissioner in New Zealand, Syed Moazzam Shah, while speaking to DawnNewsTV said the New Zealand government has so far not revealed the names or nationalities of the victims.

However, “we have identified five Pakistanis whose families and friends have been unable to contact them.” He said it could not be said at this point if these five people were among the dead or the injured.

“It is clear that this can now only be described as a terrorist attack,” said Ardern. “From what we know, it does appear to have been well planned.” Two IEDs (improvised explosive devices) were found in a car and neutralised by the military, police said. 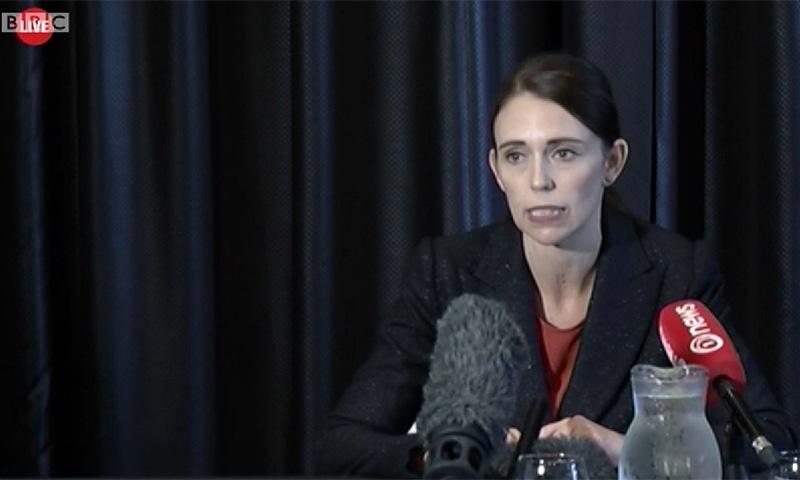 His two targets were the Masjid al Noor mosque, where 41 people died, and a second, smaller mosque in the suburb of Linwood, where seven more died. The remaining victim succumbed in hospital.

The dead were said to include women and children. Around 48 people were treated for gunshot wounds at Christchurch Hospital, including young children, with injuries ranging from critical to minor.

The survivors included 17 members of Bangladesh’s cricket team, whose game against New Zealand on Saturday has been postponed, and a Palestinian man who fled for his life after seeing someone being shot in the head.

“I heard three quick shots, then after about 10 seconds it started again. It must have been an automatic — no one could pull a trigger that quick,” the man who did not wish to be named, told AFP.

“Then people started running out. Some were covered in blood,” he said.

New Zealand police described the footage shot by the gunman as “extremely distressing” and warned web users that they could be liable for up to 10 years in jail for sharing such “objectionable content”.

In addition to the footage, a number of pictures were posted to a social media account showing a semi-automatic weapon covered in the names of historical figures, many of whom were involved in the killing of Muslims.

The attack has shocked New Zealanders, who are used to seeing around 50 murders a year in the entire country of 4.8 million and pride themselves on living in a secure and welcoming place.

Police, who initially imposed a city-wide lockdown, sent armed officers to a number of scenes and the threat level in the nation was raised from “low” to “high”.

In Auckland, 1,000 kilometres away, two unattended bags left near a railway station were detonated by military explosives experts.

Police also attended a property in Dunedin which they believe is linked to the attack and evacuated nearby residents. The southeastern city was named in the suspect’s manifesto as the original target for his attack.

Police warned Muslims all over the country not to visit mosques “anywhere in New Zealand” in the wake of the Christchurch attacks. Friday is Islam’s holy day.

Christchurch city council offered a helpline for parents looking for kids attending a mass climate change rally near the shooting.

The attack has shocked the local Muslim population, many of whom had come to New Zealand as refugees. The Ardern government has been vocal in its support for opening the doors to those suffering from wars in Syria, Afghanistan and beyond.

One witness told stuff.co.nz he was praying when he heard shooting — and then saw his wife lying dead on the footpath outside when he fled.

Another man said he saw children being shot. “There were bodies all over,” he said.

The Bangladesh cricket team — which had been in Christchurch for a Test match and was about to go into the mosque when the attack happened — all escaped without injury.

“They are safe. But they are mentally shocked. We have asked the team to stay confined in the hotel,” an official told AFP.

The attacks sparked horror and revulsion around the world.

US President Donald Trump condemned the “horrible massacre” in which “innocent people have so senselessly died”.

Mass shootings are very rare in New Zealand, which tightened its gun laws to restrict access to semi-automatic rifles in 1992, two years after a mentally ill man shot dead 13 people in the South Island town of Aramoana.

However, anyone over 16 can apply for a standard firearms licence after doing a safety course, which allows them to purchase and use a shotgun unsupervised.

Christchurch, a relatively small city on New Zealand’s south island, hit global headlines in 2011 when it was struck by a deadly earthquake, killing more than 180 people.

What we know about the attacker

The main suspect, identified as Brenton Tarrant, is an Australian national who resided in the city of Grafton in the Australian state of New South Wales.

He is suspected to have entered two mosques in Christchurch and shot dead 41 people at Masjid Al Noor at 1:40pm local time, and seven more at the Linwood Masjid a short distance away.

He was identified after having livestreamed the massacre to social media with the help of a camera attached to his gear.

According to Australian media reports, he had in the past worked as a gym instructor and personal trainer and was obsessed with fitness.

According to the Australian Broadcasting Corporation (ABC), “Tarrant described himself as ‘a regular white man, from a regular family’ who was born in Australia to a ‘working class, low-income family’.”

According to the The Sydney Morning Herald, he “was dedicated to fitness and ran free athletic programs for children”.

“He left the small town in 2012 to ‘travel’ before settling in New Zealand,” the Herald reported.

Though Tarrant recently visited Pakistan’s northern areas as a tourist and spoke on Facebook about enjoying the kindness hospitality of the people here, his beliefs — outlined in a 74-page manifesto uploaded online — revealed a disturbing obsession with racial purity and white supremacy.

“He also wrote that he began planning the attack ‘roughly two years in advance’, and chose the final location three months prior to the attack,” wrote the Herald.

“The 74-page document, called The Great Replacement, consists of a rant about white genocide and lists various aims, including the creation of “an atmosphere of fear” against Muslims,” reported The Guardian.

“The document, which suggests an obsession with violent uprisings against Islam, claims that the suspect had ‘brief contact’ with the Norwegian mass-murderer Anders Behring Breivik and that Breivik gave a ‘blessing’ for the attack,” The Guardian said, adding that Tarrant described himself as “an ethnonationalist and fascist”.

“The suspect wanted to send a message that ‘nowhere in the world is safe’,” The Guardian reported. “The choice of weapon – firearms – was designed to gain maximum publicity.”

“‘I chose firearms for the affect it would have on social discourse, the extra media coverage they would provide and the effect it could have on the politics of United States and thereby the political situation of the world,'” The Guardian quoted from the manifesto.

Prime Minister Ardern described the incident as an “unprecedented act of violence”.

“I would describe it as an unprecedented act of violence. An act that has absolutely no place in New Zealand. This is not who we are,” she said in a press conference.

“I can tell you now this is and will be one of New Zealand’s darkest days.”

Ardern confirmed that one person had been taken under custody. She alluded to anti-immigrant sentiment as the possible motive, saying that while many people affected by the shootings may be migrants or refugees “they have chosen to make New Zealand their home, and it is their home. They are us. The person who has perpetuated this violence against us is not”.