A two-member bench, comprising Justice Athar Minallah and Justice Miangul Hassan Aurangzeb, gave the judgment on petitions filed by Sharifs challenging the Avenfield verdict against them.

The IHC also ordered the accused to submit surety bonds worth Rs 0.5 million each. 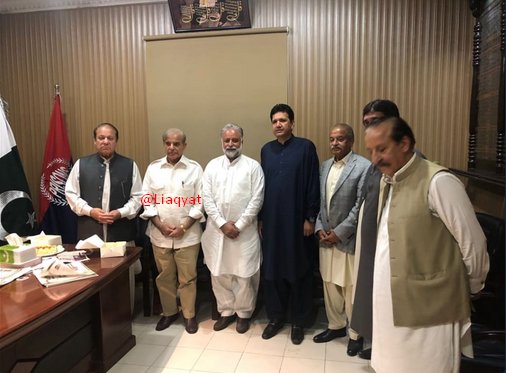 The Pakistan Muslim League Nawaz loyalists bowed down in gratitude before Allah Almighty as soon as Justice Athar Minallah suspended the conviction of Sharifs in the short verdict in packed courtroom no. 3. 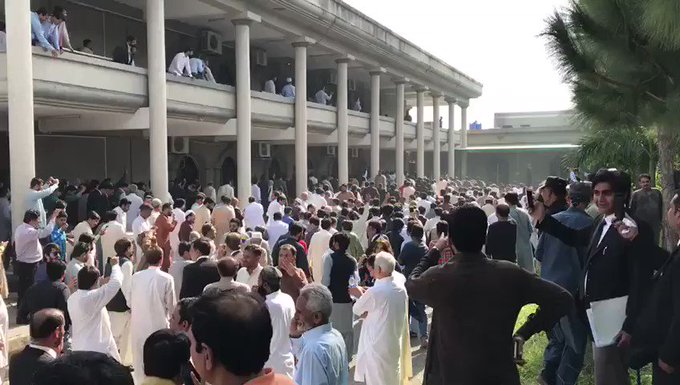 The former PM, his daughter and son-in-law remained imprisoned at Rawalpindi’s Adiala jail for 68 days.

The august court accepted the appeals filed by the former ruling family and consequently the accused would no more be incarcerated till the court announces the final verdict on the appeals.

Soon after the landmark verdict, Pakistan Muslim League Nawaz President, Shehbaz Sharif took to Twitter and quoted a verse from the Holy Quran as an expression.

“Truth has come, and falsehood has departed. Indeed is a falsehood, [by nature], ever bound to depart.” the former CM said in his brief message.

The petitions were filed by the Sharif family against their conviction in the Avenfield reference filed by the National Accountability Bureau in line with the Panama papers case verdict.

They accused were imprisoned in the Adiala jail after Nawaz Sharif and his daughter returned to the country from London.

Following the suspension, Nawaz, Maryam and Capt Safdar will be released from Adiala jail after completion of legal formalities today.

The National Accountability Prosecutor Akram Qureshi kicked off his arguments before a two-member bench on Wednesday which grilled him to establish the association of Nawaz Sharif with the London flats – the Avenfield flats tucked in British capital’s Mayfair neighbourhood.

At the start of the hearing, Justice Athar Minallah grilled the NAB prosecutor and inquired about the age of Maryam Nawaz in 1993.

‘Your case is based on the assumption that the actual owner of London flats is Nawaz Sharif instead of Maryam Nawaz,’ observed the court.

The two-member bench remarked that according to the investigations, the ownership of London flats is difficult to be attributed to former premier Nawaz Sharif.

The NAB prosecutor argued that there was no proof regarding the transfer of 12m AED adding that till 2012, Maryam Nawaz was the beneficial owner of the said properties.

Akram Qureshi argued that Maryam Nawaz acted as a facilitator in making assets beyond means.

The NAB prosecutor asserted that to conceal the ownership of London flats, a fake trust deed was forged by Maryam Nawaz to save her father.

‘Nawaz Sharif is difficult to be traced in the case,’ remarked Justice Athar Minallah and wondered if the trust deed was bogus, how could the sentence be handed out to the accused.

The NAB prosecutor continued that the onus of proof rests with the accused as they should establish ownership of the pricey flats.

On the issue of Qatari prince, the NAB official highlighted that the Qatari royal was contacted more than once for recording the statement.

‘Qatari prince was even allowed to record his statement in his homeland if he was reluctant to visit Pakistan,’ added the NAB official.

Akram Qureshi inquired that the august court would ask each and every question from him?

To this, the court replied that the NAB prosecutor had failed to provide any evidence, substantiating Nawaz Sharif’s link with the Avenfield apartments.

Justice Minallah replied that Khawaja Haris was also quizzed earlier and he was being asked questions to clarify some issues.

Justice Minallah remarked that the supreme court had asked the Sharif family to produce a money trail, which they failed to do so.

‘They [Sharif] argue that they did not transfer money from Pakistan,’ said the NAB Prosecutor.

The court questioned whether Maryam Nawaz assisted Nawaz Sharif in the purchase of London flats.

The NAB prosecutor argued that Jati Umra is the address of Maryam Nawaz adding that Maryam Nawaz admitted being dependent on Nawaz Sharif in his statement.

When Justice Minallah inquired from the NAB prosecutor that according to them, Maryam’s grandfather had no business entity outside Pakistan, the prosecutor replied that the business entities were looked after by Tariq Shafi.

‘It is not available on record that Tariq Shafi had any association with Mian Muhammad Sharif,’ added the NAB official.

The court wondered whether Gulf Steel Mills still exists to which the NAB prosecutor replied in the affirmative.

On the issue of Calibri font, Justice Minallah observed that the said font existed at that time, but was not available on a commercial level.

Justice Mina Gul Hassan ‘supposed’ that even if the trust deed was forged, how could Maryam be sentenced on assets beyond means.

‘Can any sort of sentence be handed out on the basis of assumptions,’ asked Justice Minallah.

According to the directives by the supreme court, NAb should have conducted a comprehensive inquiry into the case.

‘Where are the documents regarding the source of income of the Sharif family,’ asked the court.

Justice Mianallah asked the NAB official that according to him, the onus of proof does not rest with the anti-corruption body as the properties in question were based outside Pakistan.

Akram Qureshi replied in the affirmative to which Justice Gul Hassan inquired whether such practice was opted in any case related to a public representative.

Upon this, Justice Athar Minallah asked that the bench was inquiring about any prime minister or president.

‘Whether NAB can impose a sentence on any individual for providing bogus documents,’ asked the court.

Upon this, the NAB official replied that NAB can convict any individual for acting as a facilitator.

During the last hearing of the case, Justice Athar Minallah remarked it was assumed that the upscale London properties were in possession of children of Nawaz Sharif, with him being the actual owner.

At the onset of the hearing, Justice Athar Minallah remarked that the second verdict in the Panama Papers case was a binding on all the judges as it bears signatures of all, however, the interim order was not of a binding nature.

Upon this, the NAB prosecutor replied that the second verdict was a continuity of the first one.

Justice Aurangzeb observed that in the first order, Nawaz Sharif was not disqualified and it was a minority judgment.

‘It is not a case of trivial importance, it goes beyond the transfer of money and extends to a network of companies,’ replied the NAB official.

Qureshi continued that the completion of inquiry in the case in such a short time was not possible and so the commentary of the august court on the matter would not be appropriate.

‘Children are usually dependent on the parents, Sharif’s children were in possession of London flats,’ NAb prosecutor argued and added that father is the natural guardian of kids and owns the land and consequently the onus of ownership rests with the owner.

Justice Athar Minallah observed that according to the Sharif family’s counsel, the chart regarding the income was not presented by star witness Wajid Zia adding that even the investigative officer was oblivious of the individual who devised the chart.

The NAB officer claimed that bogus trust deeds were furnished by the Sharif family to which the judge wondered whether these deeds were registered.

Upon this, the NAB official replied that the trust deeds were intended for brothers, Hassan and Hussain.

Justice Minallah declared that it was just an assumption that the property was in the possession of Sharif’s children, however, the actual owner was Nawaz Sharif himself.

The NAB prosecutor argued that Maryam Nawaz assisted the accused in the London flats case to which Justice Gul Hassan remarked that if Nawaz Sharif was the owner of the flats, how could Maryam Nawaz be sentenced under section 9(a)(5) of the NAB ordinance.

Akram Qureshi argued that for NAB cases, bail can only be granted in the case of hardship to which Justice Minallah observed that the court would inspect whether its a case of hardship or not.

On the occasion, Justice Gul Hassan instructed the NAB prosecutor to argue on merit and fulfil his promise.

Akram Qureshi also addressed justice Minallah that he was once very close to Nawaz Sharif and also took part in the movement launched by him for the restoration of the judges.

To this, Justice Minallah replied that the movement was about the rule of law, saying that one could analyze his judgements as well.

When the NAB official objected to the bench hearing the case, Justice Minallah remarked that the august court had asked both the parties at the onset of the hearings about any objections.

The NAB prosecutor pleaded that as he underwent open heart surgery, he could not keep standing for more than two hours, requesting the court to adjourn the hearings till tomorrow.

Justice Minallah reminded him that he had pledged winding up the arguments in an hour to which the NAB  prosecutor replied that he would only take 30 minutes of the august court on next hearing.

Justice Gul Hassan remarked that even if NAB prosecutor fails to show up before the court tomorrow, the court would announce its verdict.

The Islamabad High Court adjourned the hearing till Wednesday when the court would announce its verdict.